Cribbage
Home to Swiveller’s cribbage where you can play cribbage against the computer. It has an online help suitable for beginners or experts alike and options which allow you to ask the computer for a hint, replay the previous hand, choose your own hand, let the computer determine your score or play Muggins. You can even play Duplicate Cribbage and view the log of previous moves.
Golf
A freeware game where you can hone your maths skills at estimating the correct force and angle to putt the ball around the nine hole golf course and see if you can make or beat the course par.

Learn Russian with a tutor in London
Russian lessons provided by an experienced native speaker customised to your needs in either a group or private lesson.
The Queen of Spades
You can read Pushkin's masterpiece 'The Queen of Spades' (Pikovaya Dama) in Russian with an English translation alongside.
Word usage
Lets you type in a word, or root of a word, and see how it is used in context by Pushkin in 'The Queen of Spades', or any other text you specify the web address to.
How to type in Russian
Details on how to configure your computer so that you can type in the Cyrillic alphabet.
Russian Frequency Word Test
Test yourself and learn the most common Russian words. You can choose to concentrate on words with a frequency ranking of less than 1000, less than 2000 or up to 6000, and within those words opt to just show nouns, adjectives, verbs or adverbs. You can then see the word's morphology (how it declines/conjugates) and the word in context in a newspaper article, and compare how you are doing with other people in the User Ranking table. If you know the most common 6000 words then you should be able to recognise over 90% of the words in any general text.
Russian Newspaper article reader
If you are frustrated and demoralised by the time it takes to look up the (many) words in a dictionary you don't know then this site is designed to help you as you can copy and paste the text of the article you are interested in and then click on any word to see its meaning.

History of Stanwardine in the Wood
A history and description of Stanwardine Hall built in 1580, and the nearby moated site which dates back to the 12th century. They are set in the rural countryside of Shropshire in England.

Bridge descendants of William The Conqueror
A list showing the descendants of William the Conqueror including Robert the Bruce, the Earl of Glencairn and William Bridge!
The Bridge - Corbet connection
Robert Corbet, the builder of Stanwardine Hall, and William Bridge are 17th cousins 15 times removed! Fi and Gruffudd Kynaston who lived on the moat in the 1400s are  3rd cousins 15 times removed..

A chart  showing Stanwardine owners and occupiers from the 12th to the 21st century.

Bridge Family Tree
The Bridge Family tree (originally hosted by RootsWeb but now on my own created site) tracing principally the Bridge, Hall, and MacMillan lines. Notable names are William The Conqueror , Henry I , Robert the Bruce , Robert II (King of Scotland) , The Earl of Glencairn , Annie Laurie , and Henry Platt.

There are the First World War records of Rev Henry Cecil Franks MC , William Taylor Jones , Lieutenant John Rookhurst Platt who was at Eton and Oxford and killed near Ypres in 1916, and his cousins Captain Lionel Sydney Platt who was in the Royal Flying Corps, Captain Henry Evelyn Arthur Platt who was in the 19th Hussars before transferring to the Coldstream Guards, Captain Edmond Wellesley who was also killed near Ypres in 1916 less than a month after his marriage, 2nd Lieutenant Charles Douglas Reid who was killed in the battle of the Somme at High Wood, Lieutenant Robert Ainslie Hamilton who was killed at Rossignol Wood, the Somme, during the German Spring offensive of 1918, and Captain Miles Radcliffe shot at Kemmel on 12 Dec 1914. Please also see summary of relatives who served in the war who served in the war.

There is a biography of 2nd Lieutenant Cecil Sherman Platt who died in the Boer War, and of Captain Benjamin Hall who was awarded a silver cup for attempting to repulse the French at the battle of Carrickfergus in 1760 whilst heavily outnumbered. There is also a funeral tribute, life in pictures, and letters to his mother whilst at school and in the Navy of David James Bridge.

Other notable people include John Dashwod Goldie who the Cambridge second boat is named after, Cyril Radcliffe who formed the Radcliffe line during the partition of India, and Andrew Fraser who was CEO of Barings bank during its collapse and Conservative party treasurer.

In the Tudor period, on Fi's side, notable people include Edward Neville who was beheaded at the Tower of London in 1538 for supporting his cousin Cardinal Reginald Pole (later to become Archbishop of Canterbury under Mary) who condemned Henry VIII for wanting a divorce and sought exile in France. Edward Neville's great,great,great grandfather was Edward III , and Edward Neville's granddaugher was Martha Throckmorton whose cousin, Elizabeth Throckmorton , was the wife of Sir Walter Raleigh . Martha's nephew was Robert Catesby , one of the main leaders in the Gun Powder Plot and her father was the MP Clement Throckmorton whose cousin was Catherine Parr , the 6th wife of Henry VIII .

The Melyniog Archive
Catalogue of letters and other items mainly relating to the Greaves, Hall and Platt families in the 19th century. Notable items include the courtship letters between Hannah Greaves and William Hall in 1824 and the account in the Oldham Chronicle of the shooting accident of James Platt MP on Saddleworth Moor in 1857, the Roman and Greek Coin Catalogues of Henry Platt Hall, and the sporting biography of Major James Edward Platt . It also includes many items relating to the textile machine company Platt Bros in Oldham, which was the largest firm in the world in the second half of the 19th century, such as the book Platts by R H Eastham , a Souvenir for the visit of King George V to Platt Bros in 1913 , and the 1966 Queens Award to Platt Bros.
Geni.com
Connections to notable people such as Isaac Newton, William Shakespeare, Jane Austen, David Cameron, Tony Blair, Winston Churchill, Charles I, Oliver Cromwell, Duke of Welligton, Horatio Nelson, Edward III, Llewelyn, Marcus Aurelius, Tutankhamun, and Confucius courtesy of Geni.com which has over 100 million people in their family tree.
Evolutionary tree
Going back a bit further in time courtesy of OneZoom's zoomable evolutionary tree: 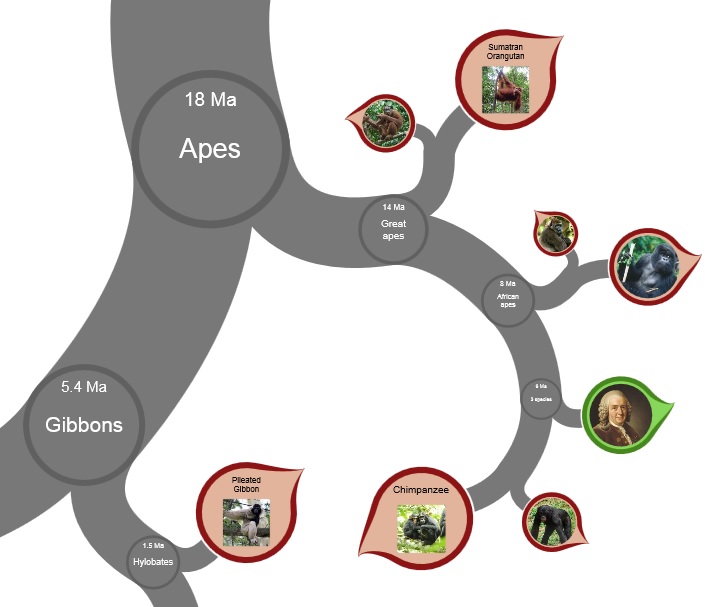